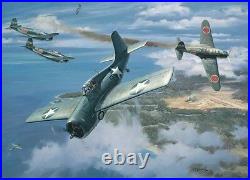 WE SUPPORT OUR TROOPS AND COUNTRY. THE ARTIST - Roy Grinnell. Oy, born in Santa Barbara, California, has been drawing airplanes ever since he can remember.

When he was not drawing them, he was building plastic models, a hobby he still passionately enjoys. When Roy graduated from Santa Barbara High School he decided to join the Navy where he was stationed in Guam. Thereafter, he attended the Art Center School of Design in Los Angeles where he graduated with honors. He moved to NYC where he was an Illustrator on Madison Avenue for several years. Later on, he decided to become a free lance artist.

This decision has led him in several interesting directions! Roy enjoys a diverse and varied background in the arts, and his unique talent has given him an incredible opportunity to express himself in his paintings whether the subject is aviation, western and Native American art, wildlife, illustration, impressionism and realism. When you view Roy's art, you will be amazed at his versatility. As the Official Artist and Honoree of the American Fighter Aces Association, Roy has completed close to 50 original paintings for the AFAA, accurately portraying the aerial combat of aces from WW1, WW2, Vietnam and the Korean War. These paintings are based on the oral history of the aces involved, and as close as they can be to what really occurred as if someone was taking a photograph of the action. Roy has won numerous art awards in both aviation art and western/Native American art. As a western artist, he was invited to join the Cowboy Artists of America. Roy's original paintings are displayed in museums and private collections including The Museum of Flight - Kenneth H. Dahlberg Center for Military Aviation History, Seattle, WA; CAF Airpower Museum - Roy Grinnell Art Gallery, Midland, TX; The George Lucas Collection, The Roy Lichtenstein Foundation; National Museum of the US Air Force - The National Aviation Hall of Fame, Wright-Patterson AFB, OH; National Naval Aviation Museum, NAS Pensacola, FL where Roy was the proud recipient of the R.

Part of American Fighter Aces Series. Launching from the deck of the USS Long Island on 20 August 1942, Capt. Marion Carl and 18 other VMF-223 pilots landed their F4F-4 Wildcats on the captured Japanese airstrip on Guadalcanal, a strategic island in the Solomon Islands chain.

At 1400 hours on the 24th, 14 Wildcats took off to intercept an incoming Japanese force of six Nakajima Kate dive-bombers and 15 escorting Zero fighters from the carrier Ryujo, joined by about 20 Mitsubishi Betty bombers from Rabaul. As Marion Carl described it, I was over the water well north of the field when I glanced down and saw a formation of Japanese bombers I rolled into an overhead pass and splashed one bomber.

My division split up and I lost contact with the other three pilots. But we continued to hammer away at the bombersI dropped a second bomber in another overhead run and show a Zero off T/Sgt. As the flight drifted toward Henderson, I claimed another bomber that was confirmed a bit later.

These four kills (added to one Zero at Midway) made me an ace, the first in the Marine Corps history, but that thought didn't occur to me at the time. We were far too busy and more concerned about our losses. 30" by 24" overall size, limited to 1250, Signed by the Artist and hand signed by WW II Legendary Marine Ace Marion Carl.

There is no limit to the number of open edition prints of a particular painting. Thats why Limited Edition prints are more expensive and more valuable to collectors than "open" edition. Rare objects are more valuable. The term "giclee" denotes an elevation in printmaking technology. Images are generated from high resolution digital scans and printed with archival quality inks onto various substrates including canvas, fine art, and photo-base paper.

The giclee printing process provides better color accuracy than other means of reproduction. The quality of the giclee print rivals traditional silver-halide and gelatin printing processes and is commonly found in museums, art galleries, and photographic galleries. All Limited Edition artwork is subject to availability at time of order. The item "First Marine Ace Roy Grinnell WW II Print co-signed by Marine Ace Marion Carl" is in sale since Thursday, July 11, 2013. This item is in the category "Art\Art Prints".