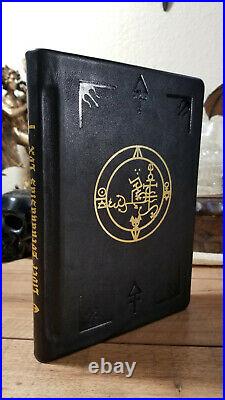 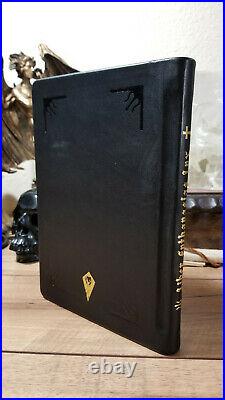 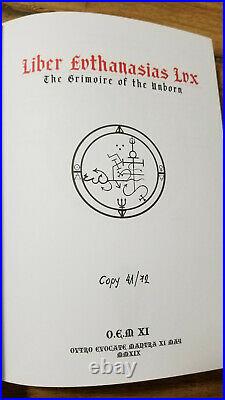 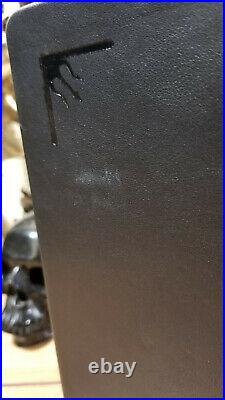 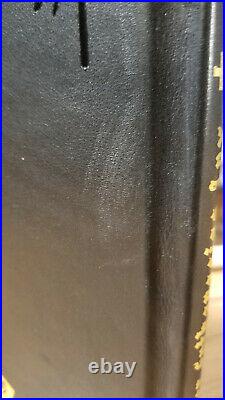 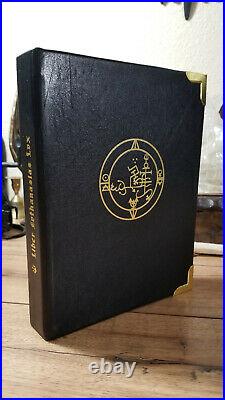 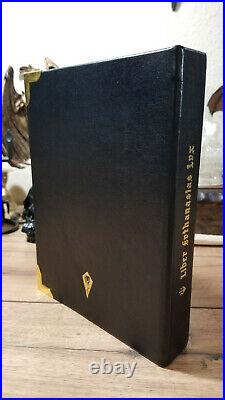 Books have their own destiny. Everything is PACKAGED VERY WELL IN BOXES for protection. PLEASE NOTE: Only the book & bookcase is being offered - the background items seen in the pictures do not come with the book. The last 4 pictures show the bookcase and the cuts to it. The book itself was not damaged and only has a few scuff marks to the cover as do most of these editions.

Through the pages of Liber Evthanasias Lvx - The Grimoire of the Unborn, the aspiring devotee will learn all the initiatory rites and detailed instructions necessary to become a part of a Gnosis Skull. By contacting vast spiritual forces, one unlocks their potential with what the Gnosis 67 calls Pan-dimensional Antimatter Magic.

As a devotee and under Zurvan's designs, one can viscerally experience the power of the arts of this Gnosis. Without any doubt, one is no longer the same person after their first steps towards the spiritual adramalik enlightenment.

An internal change takes place, and ones perceptions about spacetime, life, and death are transformed. Through each practice, ones connection with the energies is strengthened more and more, through dreams, visions, revelations, blessings, and tests.

Understanding the last, as the constant presence of 333 daggers of Chorozon in the path of the devotee, one may suddenly realize that the entities that are part of the triangle have been present at many moments in ones life, even before joining the Gnosis. However, the devotee is not a ready and finished being, the changes undergone by the entities that follow the path of this Gnosis are constant. We are mutant beings, the titans of flesh of our age. Our bodies, minds, and spirits are constantly changing, our blessings come from a superior race, which do not have the same moral parameters as humanity. Our greatest god is an unfathomable and unintelligible dimension through logic, reason, and the human sciences.

May all those who aspire to enter the path of the devotee have their hearts and souls shattered by the blessings of the Lord of Absolute Death, for we are no longer human, our bodies are altars of devotion and instruments of the will and purposes of the Blind Devil, who feeds himself on the suffering of this world. Our enlightenment will only be complete after our death. SA (Satanism Adramaliko Anti-materia) or Gnosis 67 is a Satanic expression that originates in northeastern Brazil and represents an occult movement that connects martial practices, ceremonial rituals and deep personal development of those who enter this path. With the release of this grimoire in its original Portuguese version limited to 33 copies by CHPV (Pvtridvs Vox Hermetic Circle) in mid 2019, this sinister expression of faith gained strength also in the United States and Canada, where it currently has practitioners connected with the Primordial Coven.

Kenneth Grant is a well-known occultist. Having been a student of Aleister Crowley , Kenneth Grant, with his wife, Steffi Grant, went on to create what is known today as the Typhonian Tradition. He is mostly known from his Typhonian Trilogies books, consisting of these nine volumes in this order. Aleister Crowley and the Hidden God. Outside the Circles of Time.

In these books you will find everything from Sex Magick , Qabala , Gematria , to alien praeter-intelligences who have established communication with magicians, sorcerers, and workers of arcane practices. One of the most popular titles in the Typhonian Trilogies is Nightside of Eden , dealing with the reverse, dark side, of the Tree of Life and its demonic denizens. ALEISTER CROWLEY : The Great Beast, no introduction really needed here. Aleister Crowley is known by occultists and non-occultists.

He wrote numerous books on Magick which are still being republished today. He is also widely known for his role as the head of the O. Also known for establishing the religion of. From, Dion Fortune, Israel Regardie, Frater Achad, Madam Blavatsky, Gerald Massey, to more modern occult authors like Andrew Chumbley, N. 218, Gilles de Laval, Daniel Schulke, Humberto Maggi, Dr. Spare, Nicholaj de Mattos Frisvold, Michael Bertiaux, David Beth, Craig Williams, and many more. The books we offer expand numerous occult topics. The following are short definitions of some of them. The definition of occult simply means hidden or unseen. The occult books we offer deal with what may be termed spiritual occultism. Dealing with the hidden, the unseen realms of spirits and spiritual energy. This spelling for magic with a "K" was used by Aleister Crowley to define spiritual magick as opposed to mundane magic, such as pulling rabbits out of your top hat. Magick deals with spiritual forces within yourself and within the universe. Historically, witchcraft was seen as a diabolical pact with the Devil.

We've all heard of the witches riding to the sabbats on their broomsticks after anointing themselves with magical oils where they would dance and fornicate with the Devil and his homeboys. Today, however, witchcraft is not seen in the same light. Can incorporate some dark spiritual aspects, such as the modern. However, deals with pagan gods and goddesses and has a creed of "harming none" and is basically nature worship and spell-casting, and herbal work. The books we offer on sorcery you'll find are of a darker nature.

Where darker aspects of occultism are employed in a folk-magic style. Like in traditional witchcraft, herbs, oils, bones, dirt, colors, sigils and darker spirits are employed for tasks. Necromancy uses various magical tools and techniques to speak with, communicate with, and call forth the dead. Necromancers usually employ human skulls, bones, and other items of the grave in their dark arts. Books of ritual magic instruction are usually termed grimoires.

The books we offer on voodoo are for the more serious practitioner. Our books on voudou, voudoun, santeria, palo mayombe are written by initiated students.

Such as, Michael Bertiaux, David Beth. Nicholaj de Mattos Frisvold, Dr. These books are not geared toward teaching you "voodoo spells" but rather they focus on deep, African-derived spiritual systems. Be sure to keep checking back as we add new books constantly.

We offer very select titles for serious occult students and practitioners. Your patronage is very appreciated! The item "LIMITED DELUXE 1st Ed THE GRIMOIRE OF THE UNBORN Occult Sex Magic Ritual" is in sale since Monday, November 29, 2021. This item is in the category "Books & Magazines\Antiquarian & Collectible". The seller is "desert_owl_occult" and is located in Rio Rancho, New Mexico.