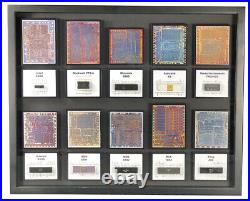 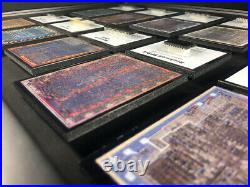 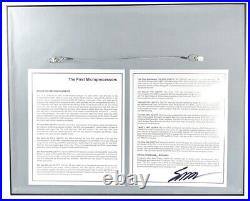 This is a mixed media artwork exhibiting ten of the first microprocessors. Each microprocessor is set in a diagram that shows the electrical designation of each lead.

These are some very creative designs that have received little attention in the market's rush to standardize on the Intel/IBM PC platform in the early 1980s. Still, these are the processors that made personal computers possible. Intel developed the first microprocessor, the 4004, in 1971. However, Intels goal was not to become the king of the microprocessor industry.

Its only interest was to sell more memory chips. Most computers and automation equipment were built with 100s of individual logic chips (which Intel did not make). Intel wanted to replace these logic chips with binary ones and zeros to be interpreted by the 4004, which needed to store these ones and zeros in...

Each of these microprocessors was the first for each of their respective companies. The Intel 4004, 4Q/1971: The 4004 was the first semiconductor device that provided, at the chip level, the functions of a general-purpose computer. The 4004 was comprised of a 4-bit Control Unit and an Arithmetic and Logic Unit.

The 4004 chip was 1/8th inch wide by 1/6th inch long. This small microprocessor had more computing power than the first electronic computer, the ENIAC, which occupied 3,000 cubic feet and weighed 30 tons.

Although using a slower technology, the PPS-4 implemented a higher degree of parallelism than the Intel 4004. Rockwell was an aerospace giant even in the 1970s, so it's interesting that the PPS-4's most famous application was as the brains of sixteen Gottlieb pinball machines. The Motorola 6800, 2Q/1974: The 8-bit 6800 was introduced to compete with Intel's 8080. Much of the design was based on Intel's 8008.

The 6800 was a simpler microprocessor than the 8080. It was the first microprocessor to use a single 5-volt power supply. It had fewer instructions and simpler control signals.

The 6800 instruction set has proved very successful. The 6800 was very popular in automotive and robotic applications.

The Fairchild F8, 1Q/1975: The 8-bit F8 was created as an inexpensive processor for service and control applications, gas pumps, vending machines, and cash registers. However, it was used in microcomputers, games, calculators, as well as in its intended targets.

The F8, like the Intel 4004, was a Harvard architecture microprocessor with separate data and instruction address spaces. The F8 required a two-chip implementation to function as a microprocessor. The Texas Instruments TMS1000, 1Q/1975: The TMS1000 was the first computer on a chip.

The 4-bit TMS1000 was the first MCU (MicroComputer Unit), which is an MPU (MicroProcessor Unit) with other memory and support chips integrated on the same silicon chip. The TMS1000 is found in many appliances, control systems, and games. The TMS1000s most famous use was in the "Speak and Spell" educational toy line. The Intersil 6100, 2Q/1975: The 12-bit 6100 was developed to emulate the DEC PDP-8E mini-computer. The PDP-8 was one of the first mini-computers and by far the most popular of the'60s and'70s.

Vast libraries of software were available at little or no cost. The 6100, for all its quirks, was the first to implement a mini-computer on a chip. The AMD 2901, 3Q/1975: The 2901 was a bit-slice microprocessor design that split the Control Unit and Arithmetic and Logic Unit into two chips. The bipolar bit-slice 2901 was a fast 4-bit Advanced ALU. Four 2901s could be linked together to create a computer that could handle 16-bits at a time; eight could be put together to create a 32-bit computer. The 2901 was a very powerful, popular design that had a cult-like following. The MOS 6502, 3Q/1975: After Motorola introduced the 6800, some of Motorolas designers left to start MOS Technologies. The highly successful 8-bit 6502 was the heart of several of the early computers, including the Commodore, Apple, and Atari. The 6502 was the microprocessor of choice for hobbyists. Apple designer, Steve Wozniak, described it as the first chip you could get for less than a hundred dollars (a quarter of the 6800 price).

The RCA 1802, 1Q/1976: The 8-bit 1802 architecture was the first based on CMOS chip technology. CMOS chips could be suspended to save battery life, operated in extended temperature ranges, and were more tolerant of electronic interference. It is no wonder that the 1802 was the first microprocessor in space.

While only a few hundred 1802s flew in space, they had wide commercial use. They were used in Chrysler electronic ignitions, RCA and Radio Shack video games, RCA video terminals, Elf computers, and ETI-660 computers.

The Zilog Z80, 1Q/1976: Zilog was founded by Federico Faggin, the co-designer of the Intel 4004 and the designer of the 8080. It was the first company founded to build microprocessors. The 8-bit Z80 has been a very popular design, more so than Intels 8080. Versions of the Z80 can be found in the TRS-80, Sinclair 1000, and Cromemco microcomputer systems of the 70's and the Gameboys and GameGear of the 90's.

The Z80 is also aboard the Hubble Space Telescope and the International Space Station. The artwork is framed in an 16"x20" black shadow box frame, with glass. All framing materials are acid free. A narrative about the artwork that includes the artists signature is placed on the back of the artwork.

Want to see more ChipScapes? Computer chips start out as ordinary sand, which is silicon dioxide. However, the silicon must be made very, very pure.

The first step is to melt the sand, in a furnace that reaches about 3200. F, and mix with carbon. This first purification process creates 99% pure Silicon, a common output is Silicon Carbide. The Silicon Carbide is processed in a trichlorosilane distillation method to create 99.9999% pure silicon called polycrystalline silicon.

The polysilicon is broken up into chunks. These chunks are melted in a crucible at about 2500. A silicon crystal seed is dipped in molten silicon and slowly drawn out to create a cylinder of silicon.

These silicon cylinders are some of the purest crystals on the planet. Once the silicon cylinder is grown to the desired diameter, it is sawed into wafers. These wafers are polished to achieve a very flat mirror surface. Transistors, and other micro-electronic parts, are built on the polished wafer in layers in a process called etching. The wafer is then sawed into its individual chips.

Each chip is mounted in an electronic package that serves to protect it and connect it to the outside world. It has been said that computer chips are the greatest value added product in the world. We essentially take a pile of sand and change it into thousands of dollars worth of computer chips. These artworks are the creation of.

Are photographs taken of computer chips, boards, and other computer artifacts. They are sort of chip landscapes, or. Most often a macro-lens or microscope is used with special lightning to achieve these unique artworks. Intel, IBM, Fairchild, DEC, Signetics, Intersil, AMD, Zilog, Motorola, MOS, NEC, Texas Instruments, are some of the great chip making companies. Chips like the Intel 4004, MOS 6502, Zilog Z80, AMD 2901, IBM PowerPC and others have changed the way people work and play.

Are dedicated to preserving and sharing these computing and communication technologies that changed the world. Artworks are fine collectible artworks. Come is a variety of shapes sizes and colors. Clusters of my artwork make for stunning displays! Would make a great gift for the nerd, geek, engineer, programmer, IT executive, or just that technology savvy person in your life.

For more information about ChipScapes. For more information about chip collecting as a hobby. The item "Ten of The First Microprocessors Intel 4004, MOS 6502, AMD 2901, etc" is in sale since Friday, June 4, 2021. This item is in the category "Art\Mixed Media Art & Collage Art". The seller is "chipscapes" and is located in Winter Park, Florida. This item can be shipped worldwide.